Several years ago it was the intention of the committee to have AGMs alternate between Edinburgh and Glasgow, but as our convenor dutifully pointed out the last time this guidance was followed was in 2014! In the years that followed our annual meeting has been regularly hosted in Edinburgh so it was lovely to return the Royal Faculty of Procurators in Glasgow.

We arrived mid-afternoon and were welcomed warmly by John Mackenzie, Chief Executive of the RFPG, who showed us the conference room and allowed the early birds a sneak peek of the main library upstairs. After a quick tea and coffee, a few blethers and a play with our secretary’s selfie stick, the meeting began at 4.30pm.

The business was short and sweet. With 17 members in attendance, apologies given, previous minutes ratified and no matters arising, it was swiftly on to the reports.

Faye spoke warmly in her convenor’s report, commenting on the camaraderie in the group and the importance of supporting each other through tumultuous times with Brexit and Indyref2 looming. We held six successful events this year including a walking tour, several SSNaPs and our beloved winter social, and Faye also mentioned several personal achievements with births, awards and marriages for members of the group in 2018/19.

The Treasurer’s report was presented by Debra and Lorna provided a Twitter analysis on behalf of our excellent social media team. Then committee member and office bearer nominations were proposed and accepted as follows:

Rona accepted the invitation to become treasurer from Debra who is stepping down from the committee after several years of holding a variety of roles.

Kayleigh McGarry and Julie McGregor joined the committee as ordinary members this year on a job-share basis, as did Katharine Calder and Kirstie Hustler, all of whom were confirmed by the attendees of the meeting. 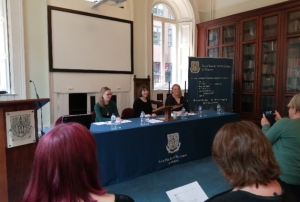 END_OF_DOCUMENT_TOKEN_TO_BE_REPLACED

Many thanks to Kirstie Hustler from the Advocates Library for providing this guest blog post reflecting on our last SSNaP training event:

In the most recent SSNaP session our convenor, Faye Cook, introduced SLLG members to a number of Life Management Systems which she finds useful in her professional or personal life. Faye made the sometimes strange sounding systems very accessible, giving lots of practical examples of how she makes use of them herself. The session had a great, friendly vibe accompanied by snacks, soft drinks and a panoramic view of Edinburgh.   Everybody took part in an open discussion of the topics. A number of people shared their own life management tools and articles of interest they had read (links to these can be found at the end of this post).

In the days following the session I looked up the systems we had covered and tried some of them out. I realised that I was already using Clean Mama at home but took the revolutionary step of giving my husband his own daily and weekly tasks which he sometimes even manages to do! I also was quite taken with Time Dorks who between them must have a helpful tool for everyone. I like One Big Thing which helps me prioritise things more effectively. I’ve been having a go at doing a Bullet Journal at home but haven’t properly introduced it at work yet.

I am finally “swallowing that frog” by belatedly getting round to doing this blog, which has turned out not to be as difficult as anticipated, so the SSNaP session must be working!

Forget standing desks: to stay healthy, you’ve got to move all day, The Guardian, 6 February 2019

Back by popular demand, the SSNaP session on current awareness was kindly hosted again by Lorna Robertson at Shepherd and Wedderburn last week and co-hosted by Heather McIntosh from Clyde & Co. This session gave attendees a valuable insight into some of the commercial current awareness platforms being used in law firms.

The two main platforms demonstrated were Linex (due to be superseded by Vable) and Manzama. It was great to see both these systems in action without having to sign up for demos with the companies and face endless pestering sales calls. It was also useful to have unbiased feedback from librarians who have used these platforms on a day-to-day basis for a number of years.

As a non-user of current awareness aggregators (over and above Westlaw alerts), this SSNaP session let me see behind the aesthetically pleasing façade of current awareness emails produced by aggregators to all the mastery behind the scenes of RSS feeds, database alerts and website trackers. While the library professionals have had to do all the hard work in selecting the correct sources to follow for their alerts, once up and running it seems to save copious amounts of time compared to having to retrieve these materials manually. The commercial platforms also have lots of pre-set current awareness feeds which can be used, and feeds set by other users can also be utilised, meaning if you use either Linex or Manzama Lorna and Heather have done a lot of the hard work for you!

While most of the current awareness aggregator platforms offer similar basic functionality of collating news sources and publishing alerts in a professionally branded email, a few differences were highlighted which may impact on the provider you choose such as:

If you are intrigued to find out more about what current awareness technology could offer you, then Vable have a number of interesting articles and webinars on the topic which were recommended at the SSNaP session: http://www.vable.com/white-papers-ebooks-videos-upcoming-events. And, who knows, maybe there will be a SSNaP Current Awareness Part III – Return of the Aggregator.

As a librarian friend observed, collectively, if we info groups (CILIPS, EDINA, SLLG, SWOP) haven’t visited every library in Scotland, we’ve made a darned good attempt in our race to dwell among the untrodden alcoves.

Building on the success of last year’s trip to the Moving Image Archive in Glasgow, the SLLG Committee suggested a group outing to a very popular exhibition, Rip It Up: The Story of Scottish Pop, running 22 June to 25 November 2018 at the National Museum of Scotland (NMS). There followed the magic words, ‘Maybe they have a library we can visit.’ Why, yes they do.

You know you’re going off the beaten track when the meeting point is the staff entrance. Ines and Morven, our hosts for the afternoon, guided us expertly through the maze that is the NMS.

Our tour began in the basement which houses the museum archives acquired at various points in its fairly complicated history (see Wikipedia). As with many libraries, across the sectors, the NMS Research Library has been charged with a significant number of items (many from the founding Society of Antiquaries’ collection) which require surveying, describing and preserving. While time and expertise to do so are at a premium, natural museum curios are not: see signs for GIANT OCTOPUS or that well-known cutie, the BLACK RAT SNAKE, with its ‘reputation for being a bad-tempered creature’.

This basement area also contains the rare book collection used by staff including the museum curators. We noticed several classification schemes on the go along with familiar-to-some carbon copy borrowing slips and several volumes of Acts of the Old Scottish Parliament!

The Library’s main reading room is on level 3 accessed from the Royal Museum side of the building, with study spaces, wifi, periodicals and around 10% of the total book collection on open shelves. This selection aims to assist visitors to further understand the Museum’s objects and activities, and is open to the public so I’d encourage you to seek it out.

A real gem of the Library is the Scottish Life Archive finding facility. In a world of OPACs and LMSs, this wall of binders brought real cheer to the group with its unceremonious subject headings. Under T alone you’ll find Tartan, Turnips and Turra Coos. You can read more about the Archive here.

Rip it up and start again

This Stopfordian has loved Scottish indie music since hearing Tigermilk as a teenager. Our visit to Rip It Up, though, demonstrated just how we have our own unique memories of gigs, bands and record stores. Our more ‘mature’ members recognised the bright red carrier bags claiming ‘I found it at Bruce’s’. Others came to life on seeing the stage outfits of Alex Harvey or Shirley Manson, or the huge mixing desk used by Chemikal Underground. We can’t keep living in the past so it was also good to see a nod to recent SAY Award winners such as Sacred Paws and Young Fathers (the latter having a connection to law libraries, I’m told).

Clearly, a huge amount of work went into researching the history and sourcing material, both for the exhibition and the accompanying BBC series which comprised archive footage and stills, and contemporary interviews, not to mention music! So engrossing were the exhibits, our group has to be ushered out as closing time fast approached.

After a tipple at Greyfriars Bobby, we made our way to Checkpoint which, according to the Times, is one of the ‘25 coolest restaurants in Britain’ which proved fairly accurate – we were seated in a shipping container. I ate a whole roast cauliflower followed by avocado dessert (both delicious). Now there’s an entry for the Scottish Life Archive.

The four most recent blog posts are initially loaded on the page. To view more posts, please use the options below:

Enter a term in the search box.
Click from the choice from the extended list of recent posts.
Click a tag in the Tag Cloud.
Select a category of post.
Alternatively you can click the button 'Older Posts' at the foot of the page to view posts chronologically.

Find on this blog

The Scottish Law Librarians Group (SLLG) represents those working in Legal Libraries and Information Services either based in Scotland or with an interest in Scots Law. It is a self-funded group, raising funds from membership subscriptions to provide training and networking opportunities. To discover the benefits of joining the SLLG please visit our website: http://www.sllg.org.uk/